2020 - please help us to support these young people

... they are members of the Mencap Super Saturday Club and this year, 2019, Grenville is asking all his choirs to help him to raise money to send them on a very special day out. The club meets on Saturday mornings at Three Ways School, Bath. Bath Male Choir will be performing at least one concert in support during 2020 and if you are reading this and would like to help Grenville to make a special trip possible, then please email him on jonesgrenville@aol.com 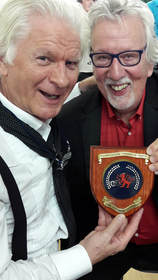 ​October 2017 - our picture shows Grenville Jones with Dr Alwyn Humphreys after a concert with the famous Morriston Orpheus Choir in Bath. A sell-out audience enjoyed a wonderful evening of Male Voice singing. This was another concert supporting the British Heart Foundation. Alwyn and Grenville are great friends and the Bath Male Choir perform a number of arrangements written especially for them by Alwyn.

​We are a Choir that started in January 2006. Founder conductor Grenville Jones always aims for the highest standards of music and presentation. There are now over 70 singers as the Choir looks ahead to a busy 2020 programme, singing to full houses across the UK, and a host of concert invitations.

In only a short time, the City of Bath Male Choir has come a long way. It's first concert was held in the Guildhall, Bath back in November 2006, what a night that was. The Choir then appeared on stage at the 2007 Bath SHOWCASE charity concert (organised by Grenville Jones, our conductor) in front of an audience of 1500 people with guest appearances from jazz singers Clare Teal and Jamie Cullum.

In July 2007 the Choir performed with Aled Jones who was knocked out by the fresh sound of England’s newest Male Choir! A memorable trip to Germany took place in 2007 and the second packed annual concert at the Guildhall early in November. The Mayor of Bath is Patron of the Choir and the Choir sang at the official Mayor-Making ceremony in March 2007.

In June 2008, the Choir appeared on stage with Alfie Boe and that was just the start of an amazing year for the Choir. When Grenville Jones entered the Choir for a new BBC series called Last Choir Standing, he little knew what was to come.

It is history now that from the hundreds of Choirs that entered, the 'boys from Bath' reached 5th place and gained the support of thousands of new fans across the whole of the UK. Following the TV show, choir numbers continued to increase, the Choir were featured on a TV commercial for the Wispa chocolate bar and bookings flooded in.

The Choir also sang to an audience of 1500 for Grenville Jones' 2008 Christmas show, which was also at the Bath Forum, here are the boys in action at the Annual concert.

In recent years the "standing ovations" have continued. The tour to Japan in 2014 was an outstanding success with the choir performing in front of huge audiences.

Find out about our weekly rehearsals here. If you are aged between 16-65 and enjoy singing, come along and meet us. Sight-reading is not important, just a love of singing, and the ablity to buy a round at the local pub where many of the boys go after rehearsals.