You may have seen Grenville as one of the '100' judges on the BBC1 Saturday night series, All Together Now. Grenville is pictured with Rob Beckett who presented the show.

Grenville is well known across the UK as founder of the Award-Winning Golden-Oldies Charity. One of the many successes has been the introduction of Primary Schools inter-generational programmes and our picture above shows Grenville with Welsh Celebrity Soprano, Katherine Jenkins who presented Grenville and his Charity with the National Lottery Education Category Award 2018.

Laurie Jones is our Deputy Conductor

Looking Back with Bath Male Choir 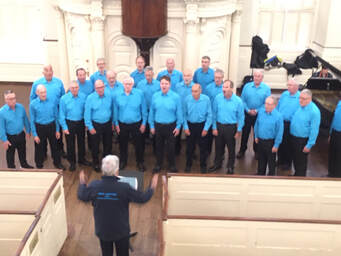 The choir have travelled extensively in recent years and whilst rehearsals have been restricted to Zoom because of Covid, our picture above shows the most recent Tour to Boston, USA in 2019. The choir performed to standing ovations and a fantastic time was enjoyed by choir members and their partners. Prior to that, the choir visited Japan and our picture below shows them performing on stage - another exceptional singing Tour for everyone concerned. 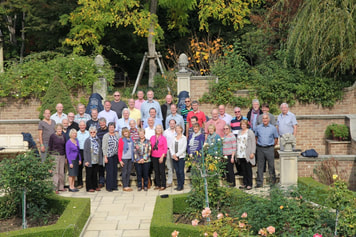 OUR picture shows founder conductor of Bath Male Choir Grenville Jones with Camilla, the Duchess of Cornwall at Bath Abbey. Bath Male Choir and The Bath Chorus (Grenville’s auditioned mixed-voice choir) were guests at a sell-out charity concert organised by the National Osteoporosis Society. Grenville produces the Society’s Christmas concert each year raising many thousands of pounds for the Charity. He leads a number of choirs and his website is
www.grenvillejones.biz

To add to his achievements, Grenville’s first novel was published in September 2015 shortly after returning from taking sell out Come and Sing workshops in Canada.  Deep Harmony was the result of 4 years endeavour by Grenville writing (usually) whilst tucked away in the corner of a hotel bar in Countries across Europe surrounded by paper and post-its! The book received rave reviews and is now on sale with 25% of all sales going to Grenville’s Goldies charity, to support more daytime sing and smile sessions across the UK.

Read about the loves and lives of Cornish choir The Verlis Singers in Deep Harmony … click here to purchase your copy on Amazon or Download on Kindle. 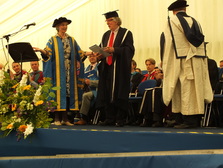 Grenville enjoys the reputation of being 'Bath's Mr Music!' He received an honorary doctorate degree from Bath Spa University in 2012 for his contribution to community music and his Charity. In the same year he was presented to the Queen at a Buckingham Palace Garden party at the invitation of the National Lottery. His contribution to music has been recognised locally and nationally. In 2015 Grenville appeared again in a national newspapers Top 100 HAPPY List – recognising his work with the Golden-Oldies charity.

He has appeared on National television working with Gareth Malone and was asked to lead a youth choir from across the West of England as part of the BBC Children in Need 2011 and 2013 appeal. He has also worked with Katherine Jenkins, Hayley Westenra, Aled Jones, Jamie Cullum, Lee Mead, Alfie Boe, Rhydian Roberts and Russell Watson. 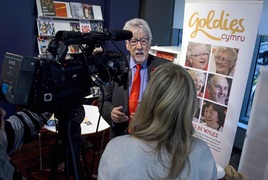 The Golden-Oldies Charity was started by Grenville in January 2008 with four fun singing sessions in sheltered housing community rooms in Bath and now has nearly 200 each week across England and Wales as Goldies CYMRU which Grenville  launched in South Wales in November 2011. Grenville’s leadership of Goldies – with Sir Cliff as patron – sees him travelling all over the country.

The Charity has attracted world-wide media coverage. Goldies is NOT a choir but it uses the popular songs of the 50s and onwards at its daytime sing and smile sessions for isolated older people and Grenville is anxious that whilst he is the founder, the charity now has an increasing base of volunteers, trustees, session leaders and supporters, without whom Goldies would not be able to develop.

He also has his auditioned Thursday evening Welcome Chorus Choir.
​
Here are the websites for the individual choirs:

www.goodafternoonchoir.org
www.welcomechorus.org.uk
He lives In Bath and is a proud Granddad! For a number of years in the 80s Grenville sang in a barbershop group called Five-in-a-Bar, making records and appearing on many national radio and TV shows including The Cliff Richard Show and Blue Peter, but he’s lost the badge! Many of the arrangements sung by the quintet were his. During the Last Choir Standing series the BBC showed a clip of a very young GJ singing with Five-in-a-Bar on Blue Peter, and one of the interviews with Grenville on the show was in the Blue Peter garden!

Grenville's background includes a number of years managing newspapers as well as a period working as a freelance for the BBC in Bristol. He built up his own successful PR and Marketing company in the 80s and 90s and also a magazine company publishing golf titles. A bad back has ended the chances of him winning the Open!

Singing was always part of a Methodist home upbringing in Purton near Swindon. He used to have a tenor voice but G says that many years of choir conducting have strained his voice now to a poor bass.

You can check out all of his projects - up and coming concerts etc on www.grenvillejones.biz